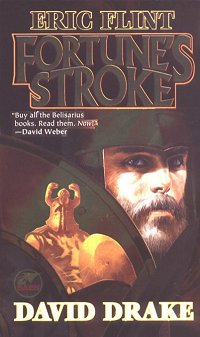 Sprawdź cenę
David Drake, Eric Flint
Opis wydawcy
EVIL FROM BEYOND TIME
RULES THE GREATEST
EMPIRE ON EARTH!
Link, the supercomputer from a future that should not exist, has used terror and gunpowder weapons to forge the Malwa Empire: harnessing the vast manpower of the Indian subcontinent and using the barbarian races of the periphery to bind the whole together. No power on Earth in the 6th century could stand against Link’s evil.
Aide, a human soul embodied in a jewel, has come back to halt evil’s progress. Aide has no power but that of truth, but truth is the only power that could move the greatest general of the age, Belisarius.
With his sword, his paladins, and his genius, Belisarius has turned the armies of Byzantium into a weapon capable of blunting the first assault of the Malwa hordes. Now, supported by allies from all the world yet free, Belisarius, with his wife and co-commander Antonia, faces overwhelming Malwa numbers in a ring that tightens about them.
There is no room for maneuver and no safety in defeat. The armies of Good and Evil gathered on the fertile plains of Mesopotamia will decide the fate of the world.
And the fate of all the future!
Teksty w Esensji
Książki – Recenzje