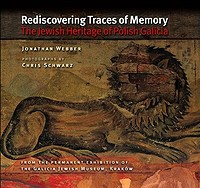 Sprawdź cenę
Jonathan Webber, Chris Schwarz
Opis wydawcy
The Jewish Heritage of Polish Galicia.
Since the Holocaust, traces of memory are virtually all that remain in Poland today after more than eight hundred years of Jewish life there. This remarkable album, published on behalf of the Galicia Jewish Museum in Krakow, offers a sensitive way of looking at that past. Based entirely on arresting, present-day colour photographs of Polish Galicia, it shows how much of that past can still be seen today if one knows how to look and how to interpret what one sees.
The traces of the Jewish past in Polish Galicia can be approached from many angles. Jewish life in Poland was in ruins after the Holocaust, and so too were most of its synagogues and cemeteries. Much evidence of ruin remains, but, astonishingly, there are also traces that bear witness to the great Jewish civilization that once flourished there synagogues and cemeteries of astounding beauty in villages and small towns as well as in the larger cities. One can also see the exact locations where the Germans murdered the Jews of Galicia in the Holocaust: not only in the infamous death camps and ghettos, but also in fields, in forests, and in rivers. The Germans tried to destroy even the memory of the Jews in Poland, and to a very great extent they succeeded; then came forty years of communism, including the antisemitic campaign of 1968. But now that Poland is once again part of a multicultural Europe, the great Jewish civilization that once flourished on Polish lands is increasingly being memorialized, by local Poles as well as by foreign Jews. Synagogues and cemeteries are being renovated, monuments are being erected, museums are being set up, pilgrimages are taking place, festivals of Jewish culture are being organized, books about Jews are being published, and there are once again rabbis and kosher food. So the traces of memory include how the past is being remembered in Poland today, and the people doing the remembering.
Given all these perspectives, the contact with contemporary realities involves a complex emotional journey: grief at a civilization in ruins; pride in its spiritual and cultural achievements; anger at its destruction; nostalgia for a past that is gone; hope for the future. Considering each element in turn and offering cultural insights and information to support each of these responses, the combination of photos and text in this book not only informs but also suggests both how to make sense of the past and how to discover its relevance for the present.
The seventy-four photographs are all fully captioned, with additional detailed background notes to explain and contextualize them. The idea is to help people understand the Jewish civilization of Polish Galicia in its local context on the basis of what can still be seen there today. People who have family connections with Polish Galicia will find this an invaluable sourcebook on their own heritage, but its innovative approach to understanding the past will appeal to anyone concerned with questions of history, memory, and identity, and how photography can make the past accessible.
Teksty w Esensji
Książki – Recenzje