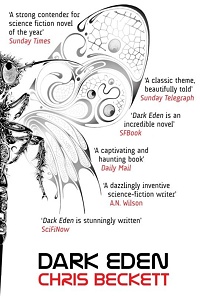 Sprawdź cenę
Chris Beckett
Opis wydawcy
Winner of the Arthur C. Clarke Award 2013
Shortlisted for the British SF Awards
A marooned outpost of humanity struggles to survive on a startlingly alien world: science fiction as it ought to be from British science fiction’s great white hope.
You live in Eden. You are a member of the Family, one of 532 descendants of Angela and Tommy. You shelter beneath the light and warmth of the Forest’s lantern trees, hunting woollybuck and harvesting tree candy. Beyond the forest lie the treeless mountains of the Snowy Dark and a cold so bitter and a night so profound that no man has ever crossed it. The Oldest among you recount legends of a world where light came from the sky, where men and women made boats that could cross between worlds. One day, the Oldest say, they will come back for you.
You live in Eden. You are a member of the Family, one of 532 descendants of two marooned explorers. You huddle, slowly starving, beneath the light and warmth of geothermal trees, confined to one barely habitable valley of a startlingly alien, sunless world. After 163 years and six generations of incestuous inbreeding, the Family is riddled with deformity and feeblemindedness. Your culture is a infantile stew of half-remembered fact and devolved ritual that stifles innovation and punishes independent thought.
You are John Redlantern. You will break the laws of Eden, shatter the Family and change history. You will be the first to abandon hope, the first to abandon the old ways, the first to kill another, the first to venture in to the Dark, and the first to discover the truth about Eden.
Inne wydania