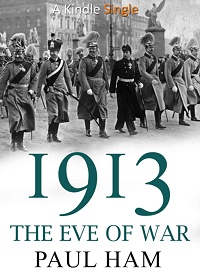 Sprawdź cenę
Paul Ham
Opis wydawcy
In Britain, people are debating a new dance called ‘the tango’.
In Germany, they are fascinated by the wedding of the Kaiser’s daughter to the Duke of Brunswick.
Little did they know that their world was on The Eve of War, a catastrophe that was to engulf the continent, cost millions of lives, and change the course of the century.
And yet behind the scenes, the Great Powers were marching towards what they thought was an inevitable conflict.
In this controversial and concise essay, the military historian Paul Ham argues that the First World War was not an historical mistake, a conflict into which the Great Powers stumbled by accident. Nor was it a justified war, in which uncontained German aggression had to be defeated. Instead the politicians and generals of the day willed the war, and prepared for it – but eventually found themselves caught up in an inferno they could no longer control.
„The Eve of War” is a brilliant re-examination of the causes of the First World War that is both an introduction to one of the most complex subjects in history and an original and thought-provoking contribution to the debate over the origins of the conflict.
Teksty w Esensji
Książki – Recenzje