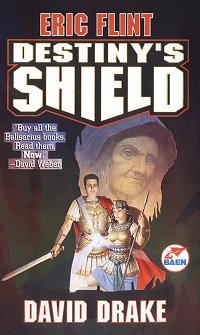 Sprawdź cenę
David Drake, Eric Flint
Opis wydawcy
EVIL FROM BEYOND TIME
The Malwa Empire squats like a toad across 6th century India, commanded by ruthless men with depraved appetites. The thing from the distant future that commands them is far worse.
AN ADVISOR WITHOUT A BODY
Those who oppose the purulent Hell the Malwa will make of Earth have sent a crystal, Aide, to halt their advance. Aide holds all human knowledge-but he cannot act by himself.
A CHAMPION FOR ALL TIMES
Count Belisarius, the greatest general of the age and perhaps of all ages, must outwit the evil empire – and then, when there is no longer room to maneuver, to meet it sword-edge to sword-edge, because,
no matter what it costs
EVIL CANNOT BE ALLOWED TO RULE MEN!
Teksty w Esensji
Książki – Recenzje