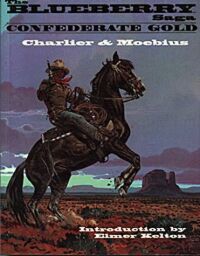 Sprawdź cenę
Opis wydawcy
Who was the man known to us as Blueberry? This bizarre and unusual name belonged to a mysterious soldier of fortune whose trail can be followed through the history of the American West, a figure who appeared to have been involved in some of the most dramatic events in American history, but who always remained behind the scenes.
The West is rife with legends and tall tales of men such as Jesse James, Billy the Kid, the Dalton Brothers, Wild Bill Hitchcock, and even better known figures such as General George Armstrong Custer. But the casual researcher will be able to locate only a few, incomplete stories about the man named Blueberry. No pulps were written about him, no serials were made about his exploits and, until recently, his very existence had sunk into an obscurity that he would have most likely welcomed.
The definitive American reprints of the classic French western. This volume will contain a history of Blueberry by Jean-Michel Charlier and Jean-Marc Lofficier, reprints of Blueberry #’s (Epic) 1,2, and part of #3, and the first English language printing of „Three Black Birds”, a Moebius written and illustrated Blueberry adventure. Introduction by Elmer Kelton.
Teksty w Esensji
Komiksy – Recenzje