Cleopatra and the Society of Architects

Bruno Cathala, Ludovic Maublanc
‹Cleopatra and the Society of Architects› 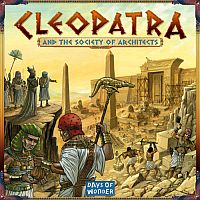 Sprawdź cenę
Opis wydawcy
Designed by Bruno Cathala and Ludovic Maublanc, „Cleopatra and the Society of Architects” is a fun and engaging family game that includes a true, three-dimensional palace that players compete to build. Players strive to become the wealthiest of Cleopatra’s architects by constructing the most magnificent and valuable parts of her palace.
Players, however, will be tempted to deal with shady characters and trade in materials of dubious origins in order to help them build faster. While these corrupt practices might allow an architect to stay a step ahead of the rest, they come with a high price – cursed Corruption Amulets honoring Sobek, the Crocodile-god. When Cleopatra finally strolls into her new palace, at the end of the game, the most corrupt architect (the one with the most amulets) will be seized and offered as a sacrifice to her sacred crocodile! Only then will the wealthiest architect, from among those still alive, be selected and declared the winner of the game.
Utwory powiązane
Gry (40)