A Player’s Guide to Castlemourn

‹A Player’s Guide to Castlemourn› 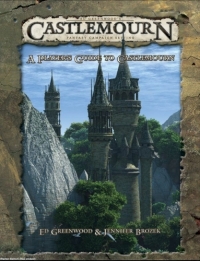 Sprawdź cenę
Opis wydawcy
Its people are unaware of their origins, the greatness of their history, or what disaster brought about the dark age that engulfed the land. Some three hundred years before the present, there existed a magical place of shining towers and marvelous wonders called the Realm of Castles. Legends tell of a great war against fell creatures that destroyed the realm, leaving scorched ruins and crumbling citadels. Whatever befell the realm was so
terrible that the gods have isolated it from other lands.
No one is permitted to leave Castlemourn, and those who enter do so at their own peril, as adventurers, treasure hunters, and questors scour the land searching for relics, artifacts, and clues to the past.
Castlemourn is a post-apocalyptic fantasy setting where kingdoms fight for power through political intrigue and outright warfare; where the brave seek their fortunes in dangerous ruins, and where everyone fears the unspeakable evil that shadows the land.
Utwory powiązane
Gry