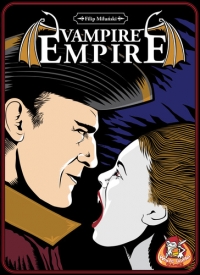 Sprawdź cenę
Opis wydawcy
In an old castle in a neighboring city, three vampires are hiding. A human investigator is trying to determine which three of nine characters he encounters are, in fact, monsters hiding in human form so that he can eliminate them. The head vampire, on the other hand, must bluff cleverly, present confusing clues, and trick the humans into attacking innocent citizens. By doing this, the vampire can kill the most important characters in the city or conquer the castle.
„Vampire Empire” is a card game of bluffing and deduction for two players. Will the vampires be successfully caught before they endanger the entire society, or will the castle and city fall forever into darkness?
Utwory powiązane
Gry