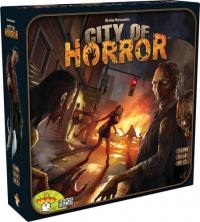 Sprawdź cenę
Opis wydawcy
„City of Horror” is a backstabbing survival-horror game. As in classic zombie movies, a shambling horde is invading the city. The goal is to survive the assault. (Un)fortunately, surviving often means sacrificing some of your fellow players to the undead…
Each player controls several characters with different abilities; these characters can move to various limited-capacity locations, which they can then barricade and scavenge for items and weapons. Critical situations, such as zombies breaking in and eating a character, are resolved using vote.
The basic game mechanisms are the same as in „Mall of Horror” (also designed by Nicolas Normandon), but „City of Horror” differs in both materials and game play in a number of ways: the city map changes each game, twenty characters are included, they can use antidotes (or die), action cards become scarce as the game goes on, you can gain points with other stuff than surviving characters…
Oceń lub dodaj do Koszyka w Kulturowskazie