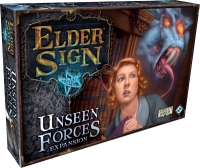 Sprawdź cenę
Opis wydawcy
„Unseen Forces”, an expansion for „Elder Sign”, brings a fresh challenge to the efforts of the investigators in this cooperative dice game set in the world of H.P. Lovecraft’s weird fiction. The museum harbors artifacts that draw the attention of horrible beings, and the unfathomable wills of these creatures make themselves known in the form of blessings and curses. Four new Ancient Ones, eight new investigators, and several new monsters accompany the introduction of these powers, and the entrance of the museum has been remodeled thanks to four Entrance Cards, which give investigators more ways to spend their turn if they’d rather not attempt an adventure.
Utwory powiązane
Gry