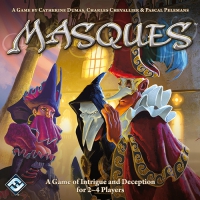 Sprawdź cenę
Opis wydawcy
A new Doge has come to power and is throwing a masquerade ball for the nobility of Venice! „Masques” is a card game in which two to four players take on the roles of influential families as they plot, scheme, and outmaneuver their opponents for the favor of powerful Venetian guilds. Hire agents to carry out your dirty work assassinating, stealing, and wooing the members of the court as you work to become the secret power behind the throne!
The nobles aren’t the only ones looking to get ahead at the masquerade ball. The palace abounds with opportunistic commoners whose loyalty can be bought for a bit of coin. Accruing ducats is the only way to secure the skills of nefarious agents, allowing a savvy schemer to frustrate the plans of his opponents and create advantageous situations for himself. The Doge’s masquerade is sure to be a lively one with all of this action behind the scenes. Frustrate the plots and schemes of your rivals as you manipulate, maneuver, and bribe your way to power in the cutthroat Venetian court in the mysterious game of „Masques"!
Utwory powiązane
Gry (7)