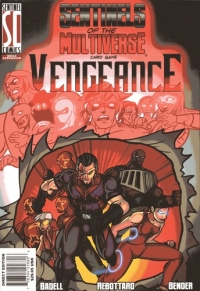 Sprawdź cenę
Opis wydawcy
„Vengeance” is a mega expansion, which comes with a complete team of 5 heroes. It also features two very exciting environments. But the truly exciting part of „Vengeance” is the villain team: The Vengeful Five!
Baron Blade has collected an impressive array of villains to take down the Freedom Five, but the primary 5 are Baron Blade himself and four other figures, who may be familiar to Sentinels fans.
In „Vengeance”, you will play a team of heroes fighting a team of villains, each with their own abilities and synergies! The effective fighting style of the heroes of the multiverse will be seen in a villain team now! With team boosting effects, supporting actions, and coordinated attacks, the Vengeful Five will take on the hero teams! And, if Baron Blade has his way, the heroes will be defeated at last!
Are you ready for Vengeance? Baron Blade is.
Utwory powiązane
Gry