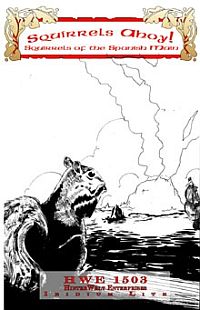 Sprawdź cenę
Opis wydawcy
Arr! Thar be Squirrels! You and your band of scurvy cutthroat squirrel tree rats crew the Faerie Queen with the Good Captain Jon Swallow at the helm. The Good Captain is quite mad and believe the squirrels to be his human crew. This does not stop them from sailing the Spanish Main in search of booty and treasure. Guarding the captain and a reluctant crew mate of the Squirrels, Peg Leg Pete, a one eyed, one eared, three legged Portuguese Water Dog keeps his good eye on their salty nuts!
Now the ancient home land has called out to its native sons sounding the alarm. The Princess Cashew has been taken captive by the Dread Pirate No Beard! Your brave band of piratical squirrels must save the poor lass before he makes her his wife. The clock is ticking and the lass has nary a hope but for the Squirrels of the Spanish Main!
"Squirrels Ahoy" is an expansion to the Squirrel Attack core game. It opens the high seas of adventure for those brave enough to ride the waves. An adventure meant to be played in one night with skills, magic and items to expand it to a campaign to last as long as you like. Come aboard matey and find yer berth!
What’s Inside:
Fun! Fun! Fun! Arr!
Teksty w Esensji
Gry – Recenzje