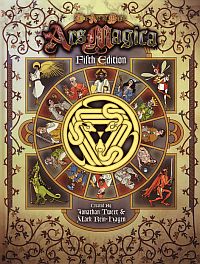 Sprawdź cenę
Opis wydawcy
Imagine an age where myth is real and where the superstitions of the common folk hold true: faeries dance in forest glades, angels protect the Church, demons corrupt the weak, and wizards wield magic beyond the ken of other mortals. You play these magi, gathered in covenants with your allies and servants, unlocking secret powers and creating wonders. You and your friends will also portray the loyal companions and grogs who stand with the magi, as a buffer between them and the mundane world that often misunderstands their power and motives. When adventures draw you out into the medieval world of Mythic Europe, your stories are the stuff of legend.
The award-winning First Edition of Ars Magica by Jonathan Tweet and Mark Rein-Hagen set the benchmark for magic systems with what′s widely regarded as the best rules for magic in all of gaming, and pioneered both troupe-style play and storytelling in roleplaying. This new edition preserves those elements, but is rewritten to improve the rules for existing players, and to be more attractive and accessible to new audiences.
Teksty w Esensji
Gry – Wieści