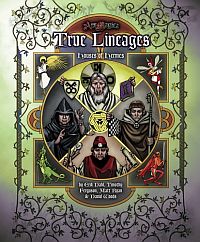 Sprawdź cenę
Opis wydawcy
„The entire Order stands on the brink of dissolution, and we are the only force that keeps it from toppling. … We are the salvation of the Order!”
– Aldico, Primus of Mercere, addressing his House during the Schism War
The True Lineages are the backbone of the Order of Hermes. In these four Hermetic Houses, each magus was taught by a magus of the House, and that master-apprentice relationship goes back to the founders. This sourcebook details the four True Lineages, including rules for original research, unique forms of magic, and new Virtues and Flaws.
House Bonisagus descends from the two magi who created the Order, and continues to supply knowledge and leadership. They explore the theoretical applications of magic, delving deeper into its arcane secrets. And they advocate peace and cooperation among the Houses, searching for other wizards who might contribute to the community of magi.
House Guernicus upholds and enforces the Code of Hermes as the official judges and investigators of the Order. Its Quaesitores believe they stand against the wheel of fate, slowing it as best they can. By the efforts of its magi, the basic structures of Hermetic society have remained intact for over four hundred years.
House Mercere holds the magi of Mythic Europe together by facilitating communication, encouraging trade, and aiding their sodales. Its heralds, heroes, mercenaries, and merchants reflect the contractictions of their House: it is exotic, but traditional; loyal, but self-centered; proud, but humble.
House Tremere provides the strength of the Order. It controls events and prepares for coming battles, gathering influence and resources to respond to crises as they draw near. Tremere are pragmatic, dutiful, and courageous magi who know that Mythic Europe is a chaotic and dangerous place.
These are the True Lineages. Without them all, the Order of Hermes would surely fall.
Utwory powiązane
Gry (28)