Realms of Power: The Infernal 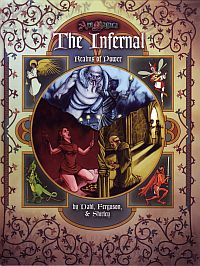 Sprawdź cenę
Opis wydawcy
Demons work to corrupt all the people of Mythic Europe. They take on attractive forms, but ultimately they seek to drag all of humanity down into damnation with them. No matter the nation, the creed, or the race, they are the true enemy.
The thirteen chapters of this book cover all of the manifestations of the forces of the Evil One. The purest appearances are the infernal auras, regiones, and vis, all of which taint those who merely come into contact with them.
Almost as pure are the demons of hell. The central section discusses the nine Orders of demons, providing rules for creating your own demons, as well as examples of demons from every Order and with different motivations. Some demons seek to corrupt, others to deceive, and still others simply to destroy.
Finally, there are rules for human characters caught up in Hell′s plots. Whether demons have shaped their lives since before birth, or they have foolishly bargained for infernal powers, these chapters show how to use them as foes in your saga.
Be ready to fight, with sword, spell, and faith.
Utwory powiązane
Gry (28)