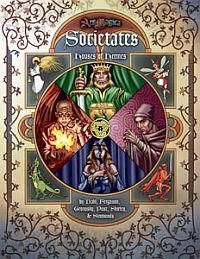 Sprawdź cenę
Opis wydawcy
The third and final volume in the „Houses of Hermes” series, „Societates” covers Houses Flambeau, Jerbiton, Tytalus, and Ex Miscellanea. These houses are formed of wizards who have come together out of shared interests and philosophies.
House Flambeau includes the champions and knights of the Order, individual warriors who fight for glory and honor, both their own and that of the Order as a whole. The House admires bold adventurers who seek out and overcome fearsome opponents. Worthy opponents are chosen according to the magus′s sense of honor, not external rules. As a result, many of the Order′s Hoplites are from House Flambeau, as are many of the magi they hunt down.
House Jerbiton live lives in pursuit of beauty, and in pursuit of living beautifully. This requires interaction with the world beyond the Order of Hermes, both for the sake of the beauty found there and to avoid the stunted lives that result from a life lived entirely within a covenant. Experts in the use of Mentem and Imaginem, followers of Jerbiton generally prefer to interact subtly with the world. The fall of Constantinople has, however, been a great shock to them, and has pushed the House onto a more active path.
House Tytalus thrive on, and admire, conflict. The main conflict they see is between an individual′s nature and the rules imposed by surrounding society, but this central conflict plays out in many, less abstract, contests. They are renowned for long-running rivalries with their Housemates, convoluted political schemes, and activities that skirt the edges of legality.
House Ex Miscellanea gathers together magi who do not fit into any other House, normally because they are still tied to elements of a pre-Hermetic tradition. The House claims to embody unity in diversity, but the emphasis is definitely on the diversity. This book provides eight detailed examples of traditions within the House, complete with rules for their non-Hermetic abilities.
Utwory powiązane
Gry (28)