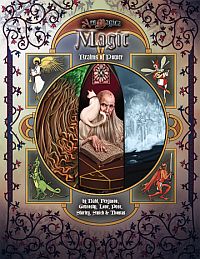 Sprawdź cenę
Opis wydawcy
Of the four realms of power in Mythic Europe, Magic is at once the most familiar and the most alien. It′s the source of power wielded by Hermetic magi, but it cares nothing for human concerns. Elementals are the essence of the elements given form; what are emotions to them? Dragons are ancient beyond belief; why should they concern themselves with the affairs of men? Spirits are bound to the phenomena of the natural world, not to the creations of humanity. And even those humans transformed by Magic have their own strange ambitions, divorced from the petty desires of mortals.
But despite this indifference, creatures and places of Magic are inexorably drawn into the lives of magi, as the members of the Order of Hermes hunt for vis, familiars, covenant sites, and the mysteries of the Magic Realm.
This book shows how to create creatures of Magic of all kinds, as player characters or antagonists. Extensive examples are included, from the Beasts of Virtue that exemplify animals to the spirits of emotions, from great fire-breathing dragons to tiny fire-breathing mice, and from elementals born of matter untouched by human hands to the walking corpses of the unquiet dead. Delve into these pages to uncover the secrets of vis, magic auras, and even the Realm of Magic itself!
Utwory powiązane
Gry (28)