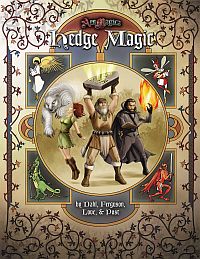 Sprawdź cenę
Opis wydawcy
Hermetic magi believe themselves to be the undisputed masters of magic in Mythic Europe. Certainly, there are a few hedge wizards, but their numbers and powers are surely negligible compared to the might of the Order of Hermes.
Those „hedge wizards” would beg to differ.
„Hedge Magic” provides you with all the information needed to play a hedge wizard from any of six different traditions, or to introduce them as allies or antagonists for a Hermetic covenant. The scholarly magicians cluster in universities, while the folk witches ply their trade in the villages. Elementalists control the building blocks of reality, while gruagachan deal out curses and blessings in the interests of justice. Nightwalkers leave their bodies to fight for the prosperity of their homes, while in the vasts of the north, rune wizards patiently wait.
Utwory powiązane
Gry (28)