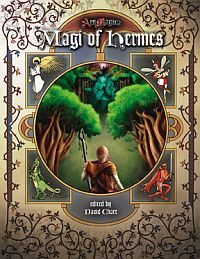 Sprawdź cenę
Opis wydawcy
Everyone knows what a follower of Flambeau is like … a master of Ignem magic, a maestro with Pilum of Fire. Apart, that is, from those Flambeau who choose to wield mundane weapons, or who control the powers of darkness and cold.
And Tytalus magi are renowned for weaving intricate plots in society, manipulating those around them. Except for those excpetional few who live alone, testing themselves against the natural elements, of course.
Go beyond the expected.
„Magi of Hermes” presents fifteen fully detailed magi who redefine the norm for Ars Magica. From the rare to the extraordinary, you’ll find them here with statistics given every fifteen years throughout their careers. And also included are the specifices for their magical creations, both spells and items, which are often as remarkable as they themselves are.
A source of inspiration, allies, and enemies for your characters, Magi of Hermes adds depth to any saga.
Utwory powiązane
Gry (28)