The Sundered Eagle: The Theban Tribunal

‹The Sundered Eagle: The Theban Tribunal› 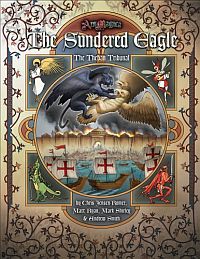 Sprawdź cenę
Opis wydawcy
Once-proud Constantinople has been ravaged by bloodthirsty Crusaders, and has sunken into depravity and ruin. With the fall of the blessed city, ancient magical bindings maintained by Roman relics of the defeated Empire are now shattered and broken, releasing beasts and demons to roam the land. Tales of unseasonal happenings draw eager hunters and curious Seekers alike. Meanwhile, the magi of the Theban Tribunal and their supernatural patrons devote their efforts to maintaining the peace. They struggle against divisions that mirror the age-old battles of the Titans and Olympian gods, who even now stir among their ancient temples and sanctuaries.
„The Sundered Eagle” contains full details of the Tribunal of Thebes. The lands of ancient Greece and Asia Minor are the home of epic legends and mighty gods of both Faerie and Magic, while the Byzantine Empire has its own myths. The Theban Tribunal’s magi and covenants, who govern themselves according to the democratic institutions of ancient Athens, live among plentiful sites of power. Both mundane and supernatural struggles for supremacy over these lands challenge characters to negotiate a maze of Byzantine schemes. Each faction will have the chance to restore peace and unity to the eastern Empire, under its own banner!
Utwory powiązane
Gry (28)